Where Is The Best Place To Shoot A Deer With A Bow?

Where Is The Best Place To Shoot A Deer With A Bow?

As a hobbyist archer who, after weeks of honing technique, can still manage to miss by several yards every once in a while, I understand the problems associated with bow accuracy. Compared to a rifle, it’s simply not as accurate, or as effective to use as a hunting weapon.

It is, however, much more satisfying, invigorating, and makes for a much cleaner kill if done correctly.

Whether you are a novice or a seasoned deer hunter who is looking to dabble in bow hunting, you need to place your shots well if you want to fill your tag. If shot placement is causing you to lose your buck, read on to learn where to shoot a deer with a bow.

The Anatomy of A Deer

Whether you’re learning about self-defense with a firearm or finding the best way to bring down a moose, this rule of thumb stands: don’t waste your ammo shooting for the head. Despite it being a reliable way to take down your game, the head makes for a small, fast-moving target.

You, as the archer, want to focus on hitting the body. The vitals located there are protected by fewer bones and are less likely to move than the head. This being said, here is a quick breakdown of the anatomy of a typical mule deer buck.

If your goal is to kill the deer there are several places that can get the job done sooner or later. It is generally considered unethical to allow an animal to suffer through purpose or neglect, so you want the deer to die as quickly as possible. With this in mind, you need to focus on hitting it in the heart and lungs. 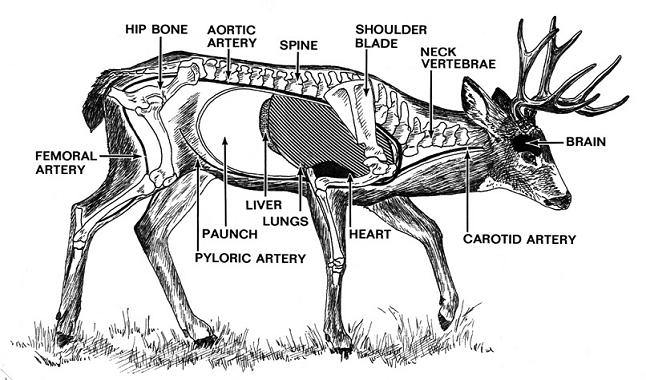 If your goal is to kill the deer there are several places that can get the job done sooner or later. It is generally considered unethical to allow an animal to suffer through purpose or neglect, so you want the deer to die as quickly as possible. With this in mind, you need to focus on hitting it in the heart and lungs.

As you can see, a deer’s heart is located alongside its lungs, which are much bigger than the heart. This means that if you aim for the heart and miss, you still might hit the lungs, which would be quickly fatal for the deer.

Hitting the deer in the femoral arteries or the windpipe will definitely end with the deer’s death, but that death will take several minutes of confused agony for it, which is not only unethical but also may result in the deer bolting into the woods and dying far off to risk being scavenged before you can find it.

The deer’s small intestine and stomach can be easily punctured as they’re not covered by the ribcage, but this will result in a long, slow, and painful death that will take place long after the deer has fled far away from your stand.

Doing this or even hitting the deer in the spine will only result in your lost arrow and game as well as the agonized death of the buck. Therefore, it is important that your goal is not to injure the animal, it is to kill it, and quickly. Memorizing the deer’s anatomy is paramount to doing this.

The Different Types of Shots

A bowhunting shot is determined based on the deer’s orientation in relation to you when you release the arrow. Depending on that orientation, the shot can be more or less difficult as well as more or less ethical.

I will divide the types of shots into three categories: Difficult, Unethical, and Golden.

This category is comprised of the quartering-to, the frontal, and the rear shots. These shots are not impossible but you can easily miss your mark and only succeed in wounding your mark.

The frontal and rear speak for themselves, as the deer will either be facing you or directly away from you. In a frontal, you have the opportunity to hit the deer in the skull or pierce through the sternum to reach the heart or lungs, but there is a greater chance of crushing the windpipe, hitting the brisket, or missing entirely.

The quartering-to is better than its mates in this category, but still qualifies as too difficult as the hitbox is too small for anyone but a professional to shoot. Unfortunately, this is one of the more often shots you are presented with. The best advice is to wait until the deer decides to show you its flank.

These shots are not only difficult but have an extremely high risk of causing the animal to suffer rather than die. This makes it more difficult for you as the hunter to retrieve your game and also violates the ethics of hunting.

The first shot to list here is the straight down shot, which is self-explanatory. If you are in your stand and you release you arrow at a deer walking or standing below you, you will most likely only succeed in partially paralyzing the animal by hitting its spinal column.

The second shot that has some renown is the “Texas heart shot”. This is effective, but unethical as it is a shot placed in the femoral artery to cause the animal to bleed out.

While it will definitely result in the deer’s death, the shot is a difficult one to make and you will most likely just lose an arrow in its haunch. If you manage to hit the artery, the deer will flee and force you to track it to where loss of blood forces it to collapse.

In this category, you will find the two shot orientations that have the greatest chance of causing immediate death both to mitigate the suffering of the animal and to make claiming your prize much easier for you.

The shot that most hunters daydream about is the broadside shot. In this scenario, the deer is perpendicular to you, and you have access to its flank or ventral side. Here you can aim four inches above the animal’s armpit to land your arrow in the lower chest cavity and pierce the heart or lungs.

Alternatively, you can opt for a quartering-away shot that better frames your aiming zone and lessens the chance that your quarry will flinch when it hears the sound of your shot.

Which Is the Best?

Now that you know where to shoot a deer with a bow, practice your accuracy, choose the equipment that bests suits you, get out there and fill your tags.

More hunting tips for you here to do it by yourself.