How To Buy The Best All Mountain Snowboard Boots? The Ultimate Guide

How To Buy The Best All Mountain Snowboard Boots? The Ultimate Guide

Even though many of us buy boots based on our own personal preferences, we must follow one rule. All mountain snowboard boots need more stiffness as compared to freestyle snowboard boots.

So even though it is a good idea to give importance to personal preference, it is an even better idea to select a pair of all mountain snowboard boots that are created to fit the demands of the all mountain riding style.

* Below, you'll find our more detailed reviews, but you can also click the links above to see customer reviews and current prices on Amazon.com 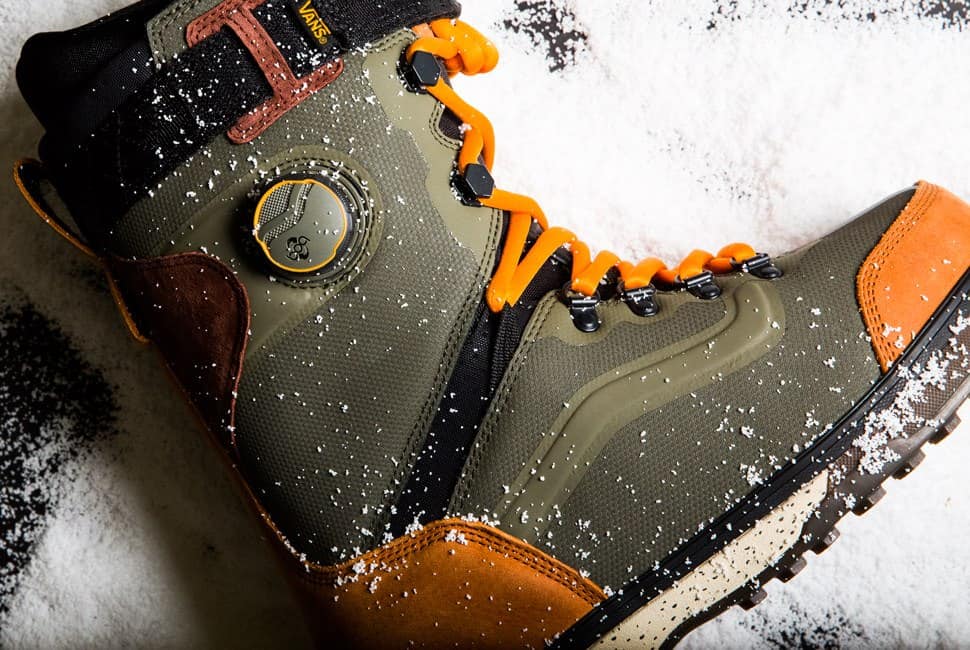 What to look for when buying snowboard boots?

When it comes to snowboard boots, there are three types of support and flex options.

Snowboard boots that are stiff provide limited flex from side-to-side.

You can buy the lightest and finest shock absorbent snowboard boots but they will do you no good unless they fit your feet properly. Sore heels, cramped feet, and crushed toes, due to slight lift in the heel, are all conditions which can be easily avoided with a pair of comfortable boots.

So don’t make the same mistake of thinking that your normal shoe size applies to snowboard boots as well. Ideally, you should be buying at least one or half size lower than your normal shoe size. It might take some time for you to break them in but they will eventually expand and fit you well.

How to Put on Snowboard Boots/Board? 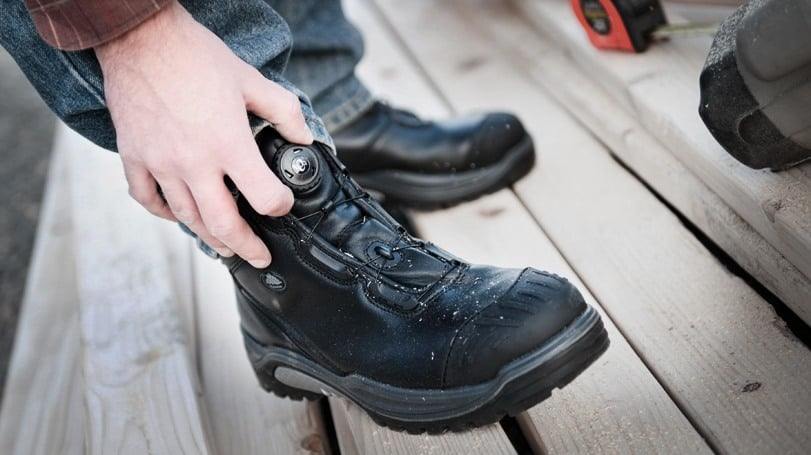 The second lacing system is the traditional lacing system. The most popular choice among riders, this system takes some time for tightening and adjusting. But once it all happens, the laces are dialed in throughout the day. 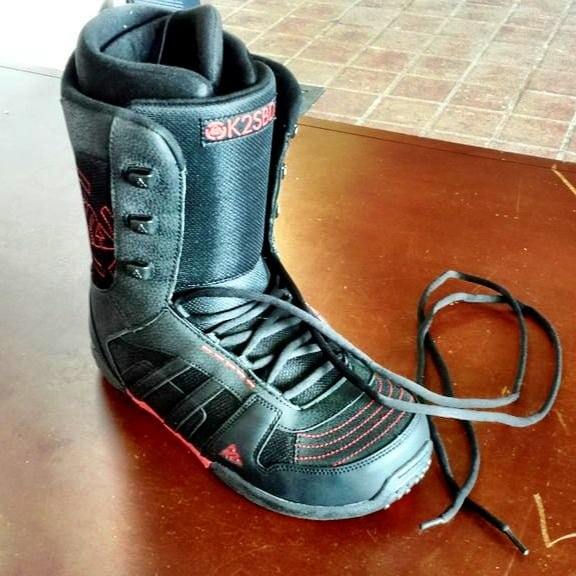 The third and last lacing system is the speed lace system. As its name suggests, this lacing system is created to give you more speed. All you have to do is yank a handle and each lacing zone gets tightened and locked in immediately. 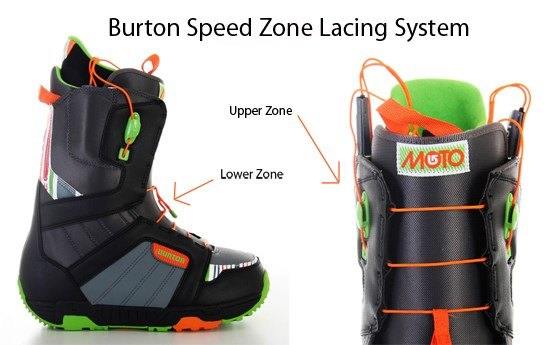 The liner of a snowboard boot is the whole inner part of the boot. Liners play a very important role in keeping your feet comfortable. How the snowboard boot feels depends entirely on the boot’s liner. That said, the all mountain snowboard boots are made of materials like heat-compliant foam to provide riders with a customized fit and an excellent feel.

Some of the best snowboard boot brands manufacture boots with ankle harnesses, closure systems, and detachable J-bars to lock in your ankle for added stability. The best time to make the most of the removable liners in snowboard boots is when you want to go snowboarding regularly.

This way, you can easily remove the liners at the end of the day and dry them out before putting them back again the following day. Pretty convenient, isn’t it?

The 5 best all mountain snowboard boots

You know you have a great pair of all mountain snowboard boots when they have the ability to tackle just about anything that you throw at them. The Ride Men's Trident Snowboard Boots are built with that kind of quality. The boots come with a triple boa lacing system. What this does is allow you to adjust the lower boot, upper boot, and inner boot independently.

The Ride Men's Trident Snowboard Boots are highly responsive when you’re bombing the backcountry and trails with precision. The soles of the boots offer maximum physical resistance when backcountry hiking.

If you’re an all mountain rider hunting for stiff snowboard boots with an exceptional response, then the Ride Men's Trident Snowboard Boots might be the perfect option for you.

The best snowboard boots for intermediate all mountain riders are the Burton Imperial Snowboard Boots. They have a pretty attractive physical appearance with a high tech quality.

If you’re into extreme freestyle riding, then these all mountain snowboard boots might be a great choice for you. As far as the flex of all mountain riding style is concerned, they are undoubtedly on another level of the aggressive side.

You will also be glad to know that these boots have an exceptional shrinkage tech. What this means is that you get a pair of snowboard boots that is comparatively smaller in the outsole region than its size.

There’s nothing better than the Thirtytwo Lashed Snowboard Boots in terms of performance. These best all mountain snowboard boots provide ultimate comfort throughout the day. Despite being medium flex snowboard boots, they perform remarkably well.

The boots have a well-constructed and pronounced cuff. What this does is allow you to lean into your boots and press the comfort toe-side turns. You can do this while easily maintaining a decent responsiveness level.

The best part about the Thirtytwo Lashed Snowboard Boots is the fact that they are designed with a roomy toe box. And we all know how important that is when it comes to providing protection and comfort.

Another great quality of these warm snowboard boots is that they lend a pretty powerful heel hold. Considering how essential a strong heel hold is in providing the much-needed support and protection, I would easily make this quality the product’s USP.

The best snowboard boots for intermediate as well as advanced riders are the K2 Men's RAIDER SNOWBOARD BOOT. They are freestyle and all mountain snowboard boots. And that means these boots are comparatively stiffer than the average level. But that doesn’t jeopardize the kind of comfort that the boots provide.

The K2 Men's RAIDER SNOWBOARD BOOTS are built with 3D formed EVA footbed. So you get abundant support and protection in this area for hard landings. You will also be glad to know that the boots are equipped with a lacing system that has an efficient combination of board coiler.

This is useful when you want to adjust the inner and the outer part of the snowboard boots’ exterior. The combination also contributes to anchoring the heel to the back side of the boot.

One of the best snowboard boot brands, DEELUXE Snowboarding, manufactured the Empire TF Snowboard Boots for all mountain riders. The technology that these boots are built with enables them to provide outstanding support to your feet whenever required.

With these snowboard boots, you can easily hit the park during the morning hours and the back bowls during the afternoon.

The DEELUXE Snowboarding 571529-1000/9110 Empire TF Snowboard Boots come with an inbuilt Asym flex. This feature is great when you want a stiff response but with a soft flex. Such an efficient combination helps in balancing the ride and providing comfort throughout the day.

The sectional control lace system of these warm snowboard boots gives you the opportunity to distribute pressure over 3 different zones. And this is essential in providing a comfortable and secure closure.

When you’re choosing the best all mountain snowboard boots, remember that it’s normal to get confused or be picky. Because you want to make sure that you get the best of the best product available on the market. And that is why I would recommend you to select the Burton Imperial Snowboard Boots from the list.

The Burton Imperial Snowboard Boots are solely created for the all mountain rider. They provide maximum support along with remarkable durability. The kind of stiffness that these boots have offers an optimal level of response.

So you can easily handle more aggressive and faster conditions. The boots can do this while also providing the much-needed comfort for a decent amount of hot laps through the park.

With a reflective foil sleeping bag-equipped footbed and Vibram outsoles, the Burton Imperial Snowboard Boots provide a practical combination of warmth and support to the feet.