How To Have A Fun And Safe Picnic

How To Have A Fun And Safe Picnic

Picnics can be fun, but it is important to understand the potential danger of foodborne illnesses and to guard against them.

Ready to grab your backpack or fire up the grill? Make sure food-borne illness won't sideline your fun.

Summer picnics are fun, whether you prepare sandwiches and snacks or go all out and grill outdoors with all the fixings. A day at the beach, hiking a trail, or just a backyard get-together with friends may include food-tasty, nutritious, and hopefully safe from bacteria.

Many people get sick each year from the food they eat. Often diarrhea, vomiting, upset stomach, and fever are blamed on the flu. But the real problem is food-borne illness, or food poisoning, caused by bacteria in the food eaten a few hours or up to a couple of days before.

Although it's unpleasant for anyone, food-borne illness is especially dangerous for older adults, babies, or people with weakened immune systems.

Fortunately, food-borne illness is preventable. Following a few basic safe food rules can greatly reduce your chances of getting sick.

Keeping the Bugs Out

Bacteria multiply rapidly when conditions are right. They prefer temperatures between 40 and 140 degrees F, a moist environment, and protein foods such as meat, poultry, fish, eggs, and dairy products.

Also, be sure to clean cutting boards and utensils in hot, soapy water after use to prevent contaminating other foods.

E. coil has received a lot of attention recently, and for good reason. It can cause life-threatening health problems. E. coil is found mainly in raw or undercooked ground beef, but it's also been found in fresh apple cider and sprouts.

To destroy this bacteria, cook ground meat to an internal temperature of at least 160 degrees F. Wash anything that comes in contact with raw ground meat--utensils, plates, your hands. Also, rinse and scrub with a brush all fresh fruits and vegetables very carefully.

Listeria, another type of bacteria that can cause food-borne illness, has also made headlines recently. Several deaths have been reported due to contaminated packaged meat. Although healthy people don't often develop severe illness after eating contaminated food, the elderly, infants, pregnant women, and people with weakened immune systems are more susceptible to listeria.

The flulike symptoms caused by listeria may lead to more serious illness. Listeria can multiply slowly at refrigerator temperature (24 to 40 degrees F). People, especially in the high-risk groups, should thoroughly reheat leftovers and ready-to-eat foods such as hot dogs and avoid soft cheeses such as feta, queso Blanco, and queso fresco.

Some Ideas for Summer Picnic

Plan your picnic with these tips in mind.

Usually, people open the drink cooler more often. Having a separate cooler for drinks will help the perishable foods in the other cooler stay cold.

Repack leftovers in the cooler right away. Food shouldn't be left out for more than two hours (or one hour if the temperature is above 90 degrees F). If the ice has melted by the time you get back home, toss the leftovers.

For variety in your sandwiches, instead of ordinary bread use pita, French rolls, tortillas, or even focaccia (Italian flat bread).

Make a really cool snack by freezing strawberries, grapes, bananas, or peach slices. Or, cut the top off a kiwi fruit and eat the juicy flesh with a spoon.

Puree fruit like peaches, pears, or nectarines with a little lemon juice in a blender. Freeze in an ice cube tray. Add to iced tea or soda water for a tasty cooler.

Grilling adds sizzle to healthful eating and is a fun way to enjoy a variety of foods. Almost anything can be cooked on a grill--even pizza! Grilled vegetables taste great along with the traditional burgers and chicken. Or make shish kebabs for a quick dinner.

Here are some safe-food grilling tips: 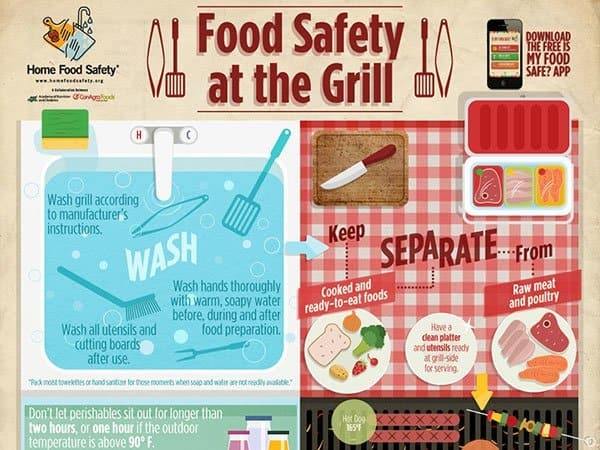 Eating lots of smoked and charred foods has been linked to increased risk of cancer. But, there's no evidence that an occasional summer cookout is unsafe. If you're not grilling every day, your risk is low.

To minimize the risk, don't let flames touch the food. Choose lean meat, trim fat, and remove the skin from chicken, because smoke from the fat dripping on hot coals contains carcinogens that can be deposited back on the food. Also, avoid eating charred or burned food for the same reason.